Season 2 Recap: The Age of Industry 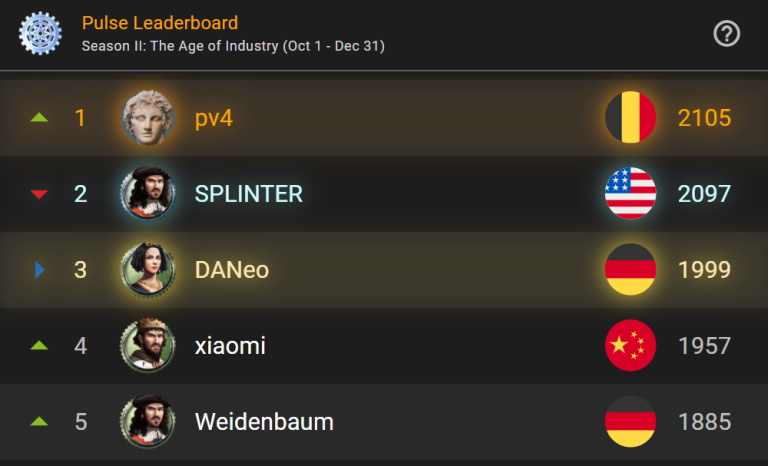 It's time to wrap up another great season of TTA Pulse.

This marks 15% growth over Season 1. As the league grows, it becomes quicker and easier to make great matches. Thanks to all of you for making this happen!

Out of these 300 players, only one takes the title of Season Winner. This time, it was a very close race between SPLINTER, pv4, DJParson, and DANeo. 24 hours before the finish, the top two places were just a single rating point apart!

In the end, pv4 jumped into the lead to clinch the season title.

I regularly play board games with some friends, and one of them got TTA for his birthday right before we went on a trip to... the Czech Republic! So that’s where I played it for the first time, which is very fitting. I fell in love with the game instantly. Not only for its strategic depth (which you can’t really find out yet the first time you play) but I also loved the flavorful connections between who or what the cards represent and how they play out in the game. I remember enjoying the fact that Pyramids cost 3-2-1 or thinking how shocked the people in my civilization must be when transitioning from a warring nation under Napoleon to peaceful Gandhi.

I play with the same group for a long time, so we’ve played a lot of games. Agricola and Terra Mystica were our favorites for a long time. Currently our game time is split between TTA and Gaia Project. (If it were solely up to me, it would be TTA all the time, but one has to compromise.) Other than that, I have a background in competitive Magic: the Gathering. I used to play tournaments all over the world.

My favorite leader is of course the GutenBEAST, but I don’t think I’ve ever picked him for 3. There are six leaders for two players, so it’s very rare that you should pick one for 3 CA before age 3. So I suppose the obvious answer is Bill Gates, as he can have the most dramatic effect on a game.

It’s great! I think I was an early adopter. I remember seeing some of the Chinese players playing it (probably back in Season 1) and wondering why they took these useless cards. I concluded it was for Darwin setup and tried it a bit, and eventually realized the Presses were just good.

This game has a tendency to create unique game states so it’s hard to pick one. Maybe the most interesting one was against DJParson when I was playing on negative food production for most of the game, constantly in famine. Age 3 Reserves was basically a 16 culture card for me!

I would love to get more personal stats, like pick rate of leaders. I know CGE wants to be careful about which data they make public, but maybe they could make it so you can only see your personal data.

I think SPLINTER will win it next time, because his rate of improvement this season was ridiculous. Also, the way the rating system works, your rating can just keep increasing if you get close to 90% win rate. If that happens, nobody can keep up with SPLINTER!

Library of Alexandria is not the best age A wonder. There, I just removed the foundation upon which everyone’s TTA world is built. :-)

Congratulations to SPLINTER and Vortex1612 for being first to reach Master Division after the season reset. Impressive.

Looking forward to match you Through the Ages!