Season 1 Recap: The Age of Competition 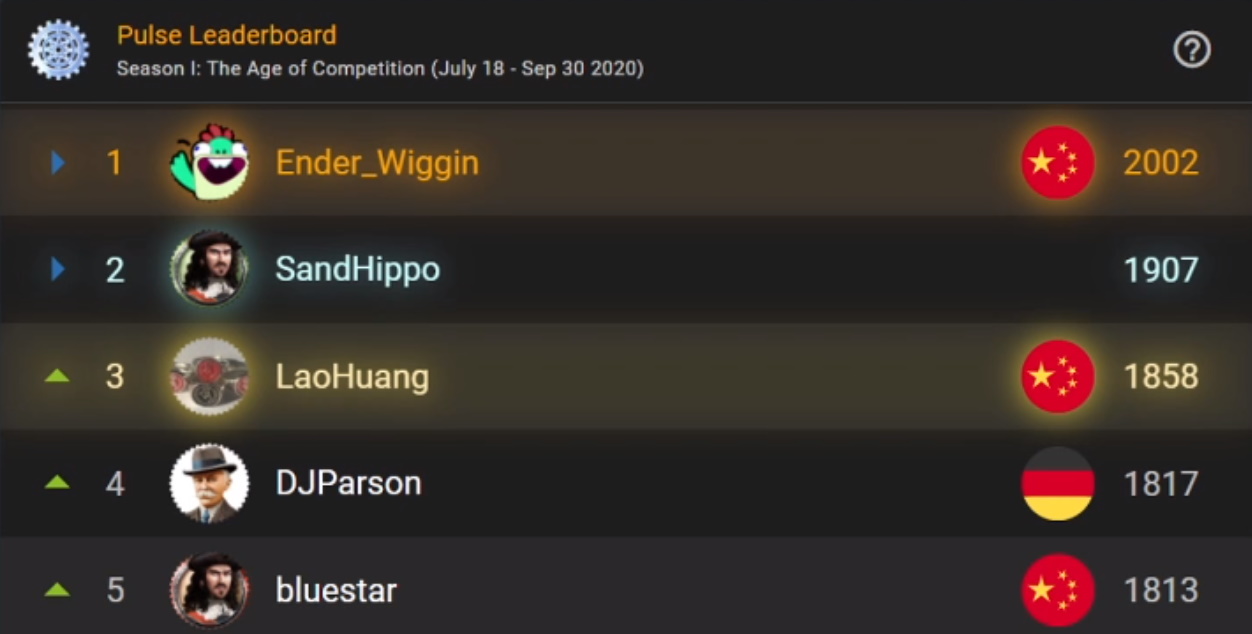 TTA Pulse Season 1 comes to an end. That was absolutely epic. First, thank you so much for joining us -- we hosted almost 3500 games in less than three months! Let's look at the leaderboard.

Special shout-outs: DJParson in position #4, who live-streamed throughout the season on his Twitch channel for everyone to enjoy. Also DANeo in #6, posting several top games on YouTube with commentary. And of course, Ender_Wiggin, the season winner. Check out his interview below!

We also give a special shout-out to THEGOAT, who completed over 100 games in the final week of the season. Congratulations!

I first learned this game in 2017, but only knew the rules and played less than 100 games. At that time, the well-built UI and epic gameplay really impressed me. In 2019, when the expansion was released, it improves the replayability, since every game can have a different set combination. We need to generate different game strategy based on the given set, which interested me again, and I played about 500 games in one year.

I’m a huge fan for eurogames, especially for these card drafting games such as TTA and Terraforming Mars. TTA shows me a beauty of balance that combining so many mechanisms but integrating them so reasonable which is comprehensive and straightforward.

For my favorite civil card I would like to say Charles Darwin. The most interesting for Random Mix Mode is that you need to pre-plan for the leaders and wonders because every game is different. Darwin may be difficult to pick without planning, because he has a special negative effect — which never happens before. However, if you have both library and arena cards, then Darwin can be extremely powerful. For military card, I like Freedom of Movement most, because of its concision and flexibility. For one reason, it can work well with urban buildings, such as Philosophy to Journalism; for another reason, it can bring my opponent a surprise when he declares a war on me.

I think the mechanism of the 2-player game is already perfect, so if I can make a change I would like to say: a starting order compensation for the 4-player game, especially for the last player. For my personal experience, and many discussion on my chatting group, most players don’t like the last position because it has a high possibility to suffer military events in early ages, and wars in ages II and III. In my opinion, the order in 2-player is quite balanced, just about half and half.

I really like the TTA Pulse platform. Thanks for your contribution. I also introduced this website to many of my friends.

Season 2: The Age of Industry

What's coming next? We heard your feedback, and are making small changes to the rating decay system for Master players.

And one more change, also based on your excellent feedback:

And one more shout-out, this one to qifeng, for becoming the first Season 2 Master Division player, in less than 48 hours. Amazing.

Looking forward to match you Through the Ages!