Hello, Through The Ages Pulse 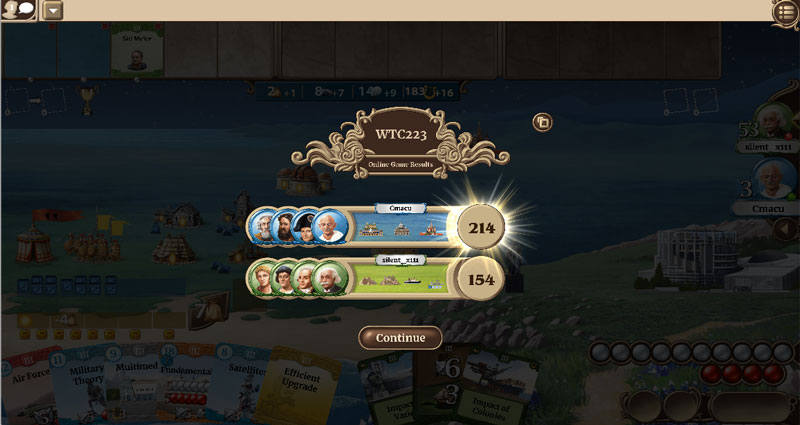 This is the story of how TTA Pulse was created. The project inevitably evolves and changes over time, so it might be completely different by the time you are reading this article. Still, it's important to take a note of where everything started. This is a story about the early ideas, concepts and inspiration to put all the efforts into building something completely new for all of us.

For me, playing games has always been about the multiplayer. And more specifically competing with other people. There is something different about playing a game, when you know your opponent is a human being. And I am not referring just to online games, but board games too. (As you might guess, I am less of a fan of cooperative and solo games.) And when you play a game like Through the Ages a lot (I've logged more than 900 hours on Steam so far, and probably about the same on mobile), sooner or later, you want to be able to measure your skill.

Through the Ages has all the core factors to be competitive: Balance - check. Repeatability - check. Low luck - check. High skill - check. Community - check. And still, at least for me, it was hard to directly compare my stats against other players. The game can be played either real time or async (both are turn based formats) Either one has advantages and disadvantages. However to be able to play competitively, it's important that the rules and setup create equal opportunity for all players There is a big difference in strategy and options offered through the match settings (2/3/4 players, base/expansion, original/digital). As some would say that the rules change the name of the game, and I agree. Who you play against also matters. Many players just enjoy playing casually with friends. I don't think this should be counted on the leaderboards. This makes for obscure, non-transparent and hard to compare stats. We can do better.

Many players participate in async tournaments. I tried these, and the async nature doesn't work for me. My very first games on the app were in the Meeple League. Didn't like the experience, even if I won most of the games. For me, the experience is flat. I like the adrenaline rush, time pressure and the rest of tha challenges of real time gaming. I guess just not my cup of tea (and I love tea)!

What if there is a way to fix these issues? What would be needed? Well, it's quite simple, actually. Pre-define the game settings and create skill-based matches against competitive opponents. Many other game communities implement this solution. It's called a MatchMaker. Not the dating one! Collect the stats from the matches, compare the results of different players on a leaderboard. Notice, that I am not specifying (or what software guys call "hard-coding") the settings and rules, but we have to start somewhere targeted, so 1v1 SuperBlitz RandomMix it is.

If this was included within the official Through the Ages app... Well, then you would not be reading this article and I would be playing instead of typing! It's not. This doesn't mean it can't, but what if we could solve this? Create a website and app that matches players and creates games for them. After a bit of research, the idea seemed feasible. Especially because there was already a solution to create games via web interface: the CGE tournament system.

Stay tuned for the next article, with more research, how the team was formed, early tests and more ideas. Thanks for reading this, looking forward to competing with you in Through the Ages Pulse.